We conduct fundamental research on synthetic, biological and biomimetic membranes. The research is performed with the goal of developing stable, high performance membranes  and other advanced technologies for environmental applications.   We are also exploring biomedical and consumer applications for these materials. We study the structure and function of cell membrane protein transporters that perform a majority of the transport across cell membranes with exceptional efficiency and selectivity and then try to recapitulate the same function in synthetic materials. We use stable block copolymers as analogs of biological lipids and channel forming cyclic molecules to form synthetic “transporters” that could be models for studying how selective separation occurs in confined pores. P.I. Kumar brings his industrial experience in water treatment and reuse (~7 years) to research application of membranes to environmental applications, and transformation of energy related additives and their possible consequences for reuse or treatment.  Out group is also interested in the  use of synthetic biology techniques and advanced microscopy to further environmental and biological research. ​

Our group is very interested in studying the basic mechanisms of transport across biological membranes.  As engineers we use these fundamental studies to guide the development of more practical approaches to developing stable synthetic materials that can mimic the properties of these molecules.    The two classes of membrane proteins we are currently evaluating include water channels and Rhodopsins.
​
Water channels.  We have particular interest and expertise in discovering novel water channel proteins (aquaporins. AQPs) and measuring single molecule transport rates.    Proteins currently being investigated include the mammalian eye lens aquaporin, AQP0 and  the bacterial aquaporin, AqpZ from E. coli and Rhodobacter sphaeroides.  Our studies have shown that the Rhodobacter spheroids AqpZ has the highest reported water transport rate of any aquaporin.  We are currently evaluating whether this is due to its intrinsically high permeability or its better insertion into the lipid and block copolymer systems we use. 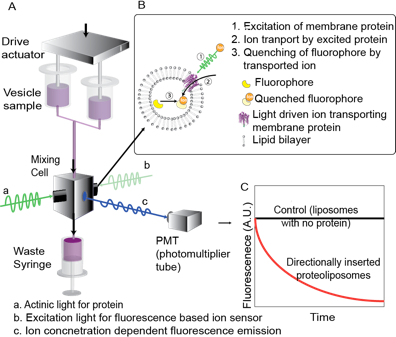 ​Rhodopsins.   Rhodopsins are unique membrane proteins that pump ions when exposed to light.   While these proteins have been researched for decades a simple light driven transport assay does not exist.   We are developing assays for measuring accurate per molecule transport rates for rhodopsins under various illumination conditions (see Figure).   We are currently working on the chloride pump from Natromonas pharaonis isolated from highly saline lakes and the only sodium and lithium pump known – KR2 from the marine flavobacterium Krokinobacter eikastus.  A surprising and totally science fiction type application of these pumps is in the field of optogenetics where parts of mammalian brains can be excited or “turned off”!  In these applications these proteins are first expressed in neurons of mammals and then the neurons can either be hyperpolarized or silenced by creating or abolishing ionic gradients across membranes by the use of light.

Most membrane proteins are delicate and difficult to use in engineering applications. However, their functions are quite attractive and merit efforts to develop synthetic analogs that can be integrated into engineering materials such as polymers. We are currently working with two analogs of water channels that show promise for applications in separations and barrier materials. These channels include the pillararene channels developed by our collaborators in Fudan University, China (Jun Li Hou group) and the ureido‐imadazole channel developed by the Barboiu group at CNRS, Montpellier, France. We collaborate with the Alek Aksimentiev group to conduct simulations on pillararene channels.

An interesting video from this publication shows that while the single file transport shown in this channel is reminiscent of aquaporins, unlike aquaporins this channel fills and empties indicating that the structure could be further optimized.  Other videos from this paper can be viewed here.

While we work on developing analogs of intricate membrane proteins, we have chosen a few membrane proteins with a stable structure for integrating into engineering applications. We hope these devices can be stable for applications but more importantly it will provide us about clues and ideas on how to stabilize such biotic‐abiotic systems that could help us tap natural systems in unique ways. 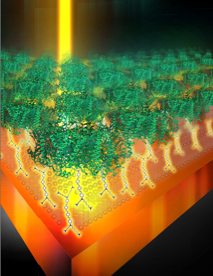 Photosynthetic protein crystals for solar photoconversion. We are working on a  photoconversion device based on the photosynthetic protein, Photosystem I, found in cyanobacteria. We recently packed a large amount of this protein into a lipid membrane leading to the formation of a flat two-dimensional crystal. This crystal was then wired to an electrode though a conductive bilayer that helps promote protein stability while allowing shuttling of electrons between the electrode and the protein crystals. We reported the highest photocurrent reported per protein used compared to other similar devices.


Porin crystals as membrane filtration materials. We work with two porins – one with ~1 nm size pores (OmpF) and another with a pore size of ~2.8 Å (AQPs). We crystallize these proteins into lipids and block copolymers in flat two dimensional arrays. These arrays are then immobilized on porous substrates to make highlyfunctional filtration membranes ‐ the larger pore size protein crystals for removing solutes larger than ~ 500 Da and the small pore size protein crystals for removing all solutes (including salts) from water.

We also have expertise in the modeling and testing of traditional filtration materials that are used to desalinate process and drinking water – reverse osmosis (RO) membranes. They are particularly interested in two aspects of RO membrane plugging or fouling – colloidal fouling and biofouling​

Colloidal fouling through Diffusiophoresis. The group has recently discovered (in collaboration with the Darrell Velegol group, Penn State) that salt gradients next to membranes such as the RO membrane can cause substantial increase in colloidal deposition on RO membranes using a mechanism not previously described in literature. We are now working to reverse this phenomenon known as “diffusiophoresis” to disrupt colloidal fouling on RO membranes. 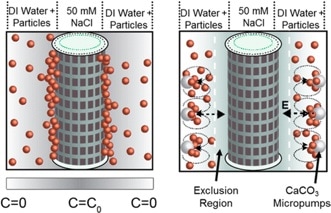 Mitigating biofouling by using engineered biofilms. Bacteria like to live in communities known as biofilms on hydrated surfaces including water treatment membranes. Almost no technology works perfectly to combat biofouling on RO membranes. We are using the approach of “fight fire with fire” to develop a novel beneficial biofilm forming bacteria that can control its own thickness to prevent performance deterioration in RO systems while repelling all other bacterial species through quorum sensing. This work is being conducted in collaboration with the Thomas Wood group at Penn State.
See our publication on probiotic biofilms here: "Wood, Thammajun L., et al. "Living biofouling-resistant membranes as a model for the beneficial use of engineered biofilms." Proceedings of the National Academy of Sciences 113.20 (2016): E2802-E2811."

High volume hydraulic fracturing has raised many environmental concerns largely due to possibility of the accidental release and treatment of the large quantity of heavily contaminated wastewater generated during the unconventional oil and gas development. It is also a challenge to conduct independent research work on this process due to lack of availability of public domain knowledge on process used in the industry. Numerous proprietary chemicals are injected downhole, yet little is known about their transformation under downhole conditions and how they change wastewater quality and subsequent treatment processes such as membrane filtration. We study both actual wastewater from the Marcellus region, as well as simulated wastewater generated in the lab under high pressure and temperature conditions, with a focus on the polyacrylamide (a major ingredient) used in fracturing fluids. We have discovered that polyacrylamide can be degraded to a great extent under typical downhole conditions and these polymer fragments are highly relevant to the complex fouling behavior during microfiltration we see in actual wastewater. This work is a collaboration with the Andrew Zydney group and the Bill Burgos group.​

​Purification and concentration of membrane proteins 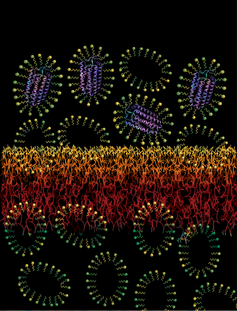 ​Membrane proteins (MPs) are important targets for pharmaceutical products and for the design of novelsensors and synthetic membranes. The hydrophobic exterior of MPs necessitates their stabilization indetergent micelles. Low-yield MPs are typically concentrated by ultrafiltration in commercially available centrifugal filers which is accompanied by a concomitant increase in concentration of detergent micelles. The resulting high detergent concentrations can destabilize MPs, interfere with subsequent structural and biophysical characterization of MPs, and present challenges in applications. Counterintuitive to
conventional applications of UF, we found that concentration polarization actually promotes detergent passage thereby selectively concentrating MP-detergent micelles while allowing passage of empty detergent micelles. In collaboration with Dr. Andrew Zydney, we performed a detailed analysis of the hydrodynamic, salt and detergent conditions that improve extraction efficiency of MPs while selectively promoting detergent passage during ultrafiltration-based concentration of MPs. We have also designed a new configuration of centrifugal membrane filters that allows high detergent passage while concentrating membrane proteins (paper in review).